That’s a lot of “A’s” … but once you’ve been to Argentina, you’ll know why it’s an A+ experience to tick off your bucket list! Here’s five things not to miss out when you’re down there…

No really. The Giganotosaurus is T-Rex’s taller n slimmer cousin. Found in Argentina, it weighed in a hefty 8,000kg. But that was nothing compared to the Argentinosaurus it hunted (that is a real name, honestly). He is one of the biggest dino’s out there. An impressive 38 meters in length and 75,000 kgs in weight, a whopper! Get that on the BBQ!

2. Ski/Snowboard in the World’s Southernmost City

Ushuaia is the capital city of Argentina’s Tierra del Fuego province. Jump on the End of the World Train to the National Park and hang out with penguins, seals and a killer whale or two. Up the road is Cerro Castor, the newest resort in Argentina with 26 runs topping out at 1,057 meters. 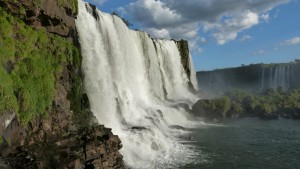 Said to be the most spectacular waterfalls in the world the Iguazu Falls rains down on you from a height of over 80 meters. Three kilometres wide and surrounded by subtropical rainforest, it is home to over 2,000 species of vascular plants. Watch out though! You might stumble on a native tapir, giant anteater, howler monkeys or jaguar if you wander too far.

Considered a non-technical climb, Aconcagua is located near the border with Chile. The highest mountain in South America you’ll reach almost 7,000 meters if you make it to the top. First summit recorded dates back to 1897, and the youngest ever up there a mere 9-years old!

5. Become a Ski or Snowboard Instructor

Well, we had to include it really – otherwise how are you going to get there to do all the others! Come with us for the most amazing 8 or 9-week Argentine adventure. You’ll live in a lakeside lodge and have everything you need for the time of your life – 20 hours coaching per week, lift pass, travel to/from the mountain, Spanish lessons, Argentine BBQs (no dino steaks though unfortunately), horseback riding with Gauchos, cat-skiing on a private mountain and a two-day, two-night trip to Buenos Aires, AND your BASI Level 1 & Level 2 exams, first aid course, backcountry and freestyle clinics, and loads more… we can even help you find a job for the upcoming winter!

If you want to have a chat about Argentina contact Peak Leaders here and we’ll happily answer all your questions.